Marloes Kraan is a marine social scientist, working as a researcher at the applied research institute Wageningen Economic Research (WEcR), and at the Environmental Policy Group (ENP) at Wageningen University.

She is co-director of the Centre for Maritime Research (MARE) in Amsterdam, member of the Strategic Initiative on the Human Dimension (SIHD) in ICES and co-chair of the Working Group on Social Indicators (WGSOCIAL).

Marloes is interested in contributing to increasing inter- or transdisciplinarity in maritime research, interactive fisheries governance and improving the applicability of social science in fisheries science and policy. 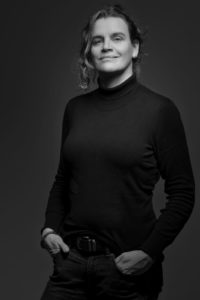 Marloes studied Cultural Anthropology at the Vrije Universiteit in Amsterdam (1994-2001). During her studies she lived in Lisbon, Portugal for half a year studying at the University ISCTE. She specialised in Religious and Symbolic Anthropology and wrote her masters thesis, published by the Wetenschapswinkel of the Vrije Universiteit, about the Ghanaian migrant community in Amsterdam Southeast.

After university she soon started working at the Centre for Maritime Research (MARE) as a junior researcher (2002-2007) and has since been involved with MARE of which she became co-director in 2018. In 2002 she began her PhD research amongst Ghanaian fisher migrants funded by the Amsterdam Institute for Metropolitan and International Development Studies (AMIDSt), University of Amsterdam.

During her fieldwork period (2003-2005) she was affiliated to the Institute of African Studies at the University of Ghana, Legon, Accra. She was lecturer for the People and the Sea lecture series (2008), worked for the journal Maritime Studies (MAST) (2002-2006), and (co-)organised the People and the Sea conferences of the Centre for Maritime Research.

From 2008 – June 2011 she worked as a policy officer sustainable fisheries at the Dutch FIsh Product Board. The Dutch Fish Product Board is a public-law industrial organisation of and for the entire fish industry (fisheries, aquaculture, processing and trade). She contributed to the sustainable policy of the Dutch fishing sector and was the secretary of the Responsible Fish Committee. Between 2010 and 2011 she guided the Dutch demersal fleet in the MSC proces. From 2011-2020 she worked at Wageningen Marine Research as marine social scientist.